Home | Publications and resources | Research | Lions under the Throne

Sir Stephen Sedley and Cambridge University Press (CUP) have allowed us to publish the introduction to this hugely well received and fascinating book. It is a truly unique work , and comes highly recommended for any public lawyer, or indeed anyone interested in the history, impact and development of public law in England.

The first part of this chapter sketches the early growth of English public law. The second part tries to describe what it was like to be involved in the modern take-off of public law as it roused itself from its long sleep.

It seems surprising, given the modern prominence of judicial review of governmental acts, that no panoptic history of the public law of England and Wales exists. By public law I mean the body of law, embracing both administrative and constitutional law, by which the state is regulated both institutionally and in its dealings with individuals.  This book does not fill that large space: it is, rather, a series of test drillings into a landmass. The vertical drillings are thematic attempts to trace their topic from early days to the present. The horizontal ones take a stratum of time and examine developments in public law within it.

CUP pages for the complete book are here.  It is available in hardback, paperback and e-book.

You can see Sir Stephen talking about the founding of the Public Law Project in our 25th anniversary film, here.

Lions under the Throne, Introduction 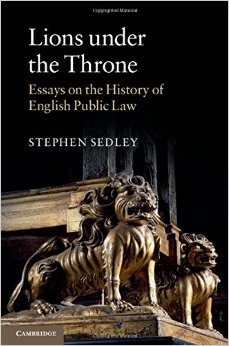