What place does mediation have in judicial review cases? Research by the Public Law Project (PLP) and the University of Essex on the permission stage in judicial review concluded that most judicial review claims are settled and that most settlements satisfy the claims made in the judicial review. While some cases that settle as a result of bilateral negotiations could arguably result in a better outcome for one or both parties were they mediated instead, mediation is an unlikely option where more familiar and straightforward routes to disposal are available to lawyers.

Mediation in judicial review would, therefore, be likely to be considered in cases in which both parties have an interest in reaching a settlement but are unable to do so because negotiations have become ‘stuck’. Indeed, PLP’s parallel empirical research on mediation and judicial review established that mediation can be a useful process where negotiations are impossible, diffi cult or have broken down. As an independent neutral third party, a mediator is in a good position to assist where parties are in general agreement about the course of action required to resolve a dispute but need help to hammer out the detail, as well as to reduce or obviate oppositional dynamics in more conflictual situations. In several of the case studies (see Appendix I), mediation enabled underlying issues in a dispute to be teased out, and all the successful mediations resulted in outcomes that gave claimants more than they could have achieved had they been successful at court.

The empirical research on mediation also showed that many public law practitioners have no detailed understanding of the mediation process and confuse it with other forms of settlement negotiations such as roundtable meetings. The latter are, of course, a useful means of resolving disputes, but they are different from mediation in many respects and, therefore, appropriate in different circumstances. 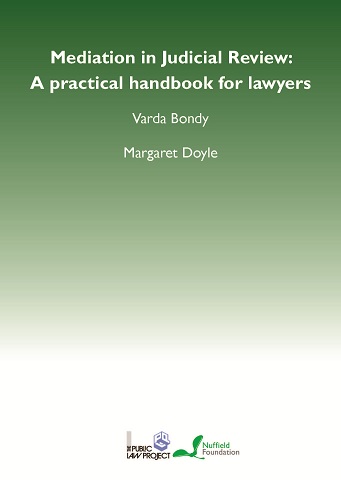